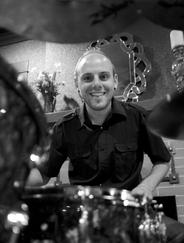 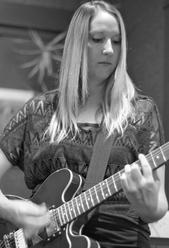 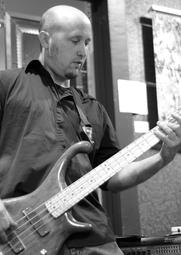 The Phoenician Four Jazztet was created for a last minute show under the name “The Last Minute Trio” with only three members: Joshua Enns (drums), Tony Salce (saxophone), and Scott Harris (bass). After playing the show, they collectively decided they wanted to continue playing jazz with each other. They soon chose to fill out their sound and brought in a fourth member, Kristen Turner, to play cello as an experimental instrument for the jazz band.  After a few rehearsals, Kristen switched to the guitar and piano, which better fit the genre. The Phoenician Four was born.  They started playing public and private shows around Arizona.

A year later, Scott left the band to focus on his new family. Tony suggested a bassist, Mike Willinger, that he had played with before.  After a couple rehearsals, they knew he was a great addition and invited him to be the new bass player.

The Phoenician Four is currently playing shows in Phoenix and around Arizona. They continue to learn new jazz standards, modern music as well as writing and arranging their own material.  They recorded their first CD in September 2014 with audio engineer, Aaron Miller.  Those recordings can be heard on the home page. They have recent finished their second CD which was recorded at Deep Roots Studio in August 2018. Stayed tuned for teasers and the release of The Phoenician Four EP! 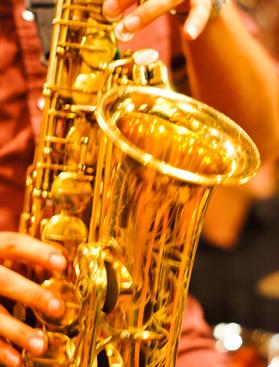 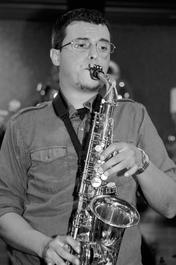 A native to Arizona, Mike has been playing bass guitar for 22 years.  He has had experience playing rock, metal, and jazz music in numerous bands around the Phoenix area.  He enjoys the ability to learn and contribute to different styles of music.  He studied at Phoenix College and is currently back in school working on his accounting degree.

Born 35 years ago, Antonio has spent 26 of those years as a musician.  He has played saxophone at Phoenix College, where he honed his craft and in private groups, building up his repertoire and showmanship.  As the front man of The Phoenician Four, his versatility allows him to play classic jazz standards yet make each song unique with his improvisational skills.  He has also been the source of new material for the group, making sure they expand their sets and keep things fresh.

Kristen is a classically trained cellist and versatile musician.  She holds a Bachelor’s Degree in Music from Towson University and completed the Music Therapy Equivalency program at Arizona State University.  She is currently a board certified music therapist who works at the Arizona State Hospital.

From her times in Baltimore and Phoenix, she has been in a variety of bands, gaining experience in live performance and playing genres such as Celtic, Rock, Latin, and world music.  Kristen is also a song-writer and enjoys performing her own music on occasion.  Music has always been a passion of hers and she continues to enjoy the musical journey that she is on.

Joshua was born and raised in Phoenix, Arizona and has been playing the drums for 24 years.  His repertoire includes everything from Jazz and Blues to Funk and Rock.  Joshua took six years of private drum lessons, developing his skills at a young age and exploring new styles of music.  He played for The City of Phoenix Jazz Band and in jazz combos at Phoenix College, where he also received his degree in music recording and technology.  Having played in many other bands and side projects along the way, Joshua has come back to his jazz roots, playing the music that he truly loves.